Movie of the day: The Last Duel 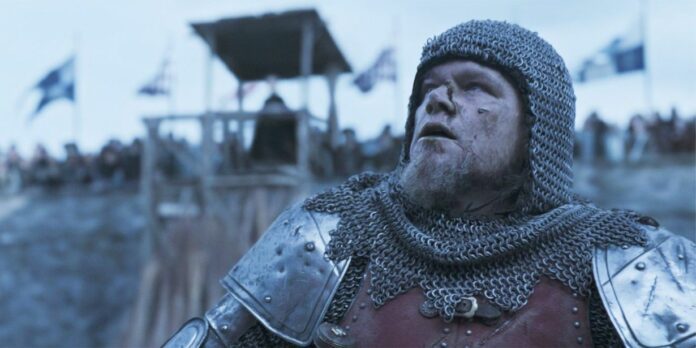 Among the great director still working, Ridley Scott, 84 on November 30, is certainly the most dynamic. It’s quite usual for a director of a certain age to work faster. It’s a matter of need applied to the perfect knowledge of making movies. Sir Ridley Scott made movies that are part of the history of cinema such as The Duelist, Alien, Blade Runner, Gladiator, then it’s even easier for him to work fast.

Scott couldn’t be indifferent to this script based on a historical event, the last duel legally allowed in France to solve a case of rape. Scott is quite used to film duels, the symbolic fight that represents the duality of the human being and the eternal fight between good and evil. The events of The Last Duel are set in Normandy in the 14th Century. Jean de Carrouges and Jacques Le Gris were friends, until the second one rapes Carrouges’ wife Marguerite. The man rejects the allegations while the woman bravely pierces the veil and publicly accuses the offender risking her reputation and her own life. The sentence will be given by God, the duel will decide where the truth is.

«When I first heard about the last legal duel fought in medieval France, I knew it would make a powerful film. And when I learned that Matt Damon, Ben Affleck, and Nicole Holofcener were writing the script, there was no way anyone else was going to direct it but me». Every movie directed by Sir Ridley is an event and this is even more because old friends Affleck and Damon write a movie together again after almost 25 years. The last time was for Good Will Hunting who gave them an Academy Award for best original screenplay. They team with Nicole Holofcener, a trained director and screenwriter that gives a particular strength to the point of view of Marguerite in this Rashomon shaped structure.

Affleck and Damon also act in The Last Duel. The first one is de Carrouges, the latter is Count Pierre D’Alençon. De Gris is Adam Driver who will work again with Ridley Scott for House of Gucci. The real protagonist is Marguerite played by British actress Jodie Comer (Free Guy).